The Indian Constitution is the lengthiest and the most detailed of all the written constitutions of the world.

The American constitution originally consisted of only 7 Articles. 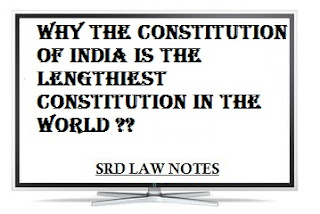 The extraordinary bulk of the Constitution is due to several reasons....are as follows -

3)  The vastness of the country and peculiar problems relating to the language have added to the bulk of the Constitution.

4) The constitution contains a long list of fundamental rights and also number of Directive Principles,  which confer no justifiable right upon the individual. Though these directives by their very nature could not be made legally enforceable yet the framers incorporated them in the Constitution with a view that it would serve as constant reminder to the Future government that they will have to implement them in order to achieve the ideals of the welfare state as envisaged in the Preamble of the Constitution. It was also felt that the smooth working of an infant democracy might be jeopardised unless the constitution mentioned in detail things which were left in other constitutions to ordinary legislation. This explains why we have in our constitution detailed to provisions about the organisations of the Judiciary, the services, the public service commissions,  Elections and many transitory  provisions.
Author Unknown