Salient features of the Indian Constitution  -

2) The lengthiest constitution in the world - 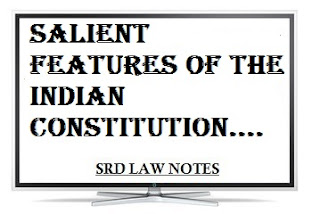 7) A federation with strong centralising Tendency

It is codified and defines the nature of the Constitutional set up. It defines the Rights of its citizen and rules concerning the political set-up.( Britain has an unwritten constitution ,it is governed by customs precedents and judicial pronouncements)

2) The lengthiest constitution in the world -

The constitution of India establishes A Parliamentary form of Government both at the centre and at the states. In this respect the makers of the Constitution have followed the British model in toto. The reason for this is that we were accustomed to this type of government. The essence of the parliamentary form of government is its responsibility to the legislature. The President is the constitutional head of the state. The real executive power is vested in the council of Ministers whose head is the Prime Minister .The council of Minister is collectively responsible to the lower house ( Lok-Sabha). The members of the lower house are elected directly by the people on the basis of adult franchise, normally for 5 years. The position is the same in the states. This government is therefore , called a responsible government . On the other hand the American constitution establishes a Presidential type of government based on the principle of separation of powers. The president is the real executive elected directly by the people for 4 years. All executive powers are vested in him. He is not responsible to the lower house, ( the Congress). Members of the his cabinet are not members of the Legislature. they are appointed by the president and therefore responsible to him.

A) That the process of amendment is complicated and difficult.

B) That matters which should have been left no ordinary legislation having been Incorporated into the constitution on change in these matters is possible without undergoing the process of amendment.

The incorporation of a formal declaration of Fundamental Rights in part III of the Constitution is deemed to be a distinguishing feature of a democratic state.  This rights are prohibitions against the state.  The state cannot make a law which takes away or abridges any of the rights of the citizens guaranteed in the part III of the Constitution. If it passes such a law it may be declared unconstitutional by the courts . But mere declaration of certain fundamental rights will be of no use if there is no machinery for their enforcement. Our constitution has therefore conferred on the Supreme Court the power to grant most effective remedies in the nature of writs Habeas Corpus, Mandamus, Prohibition, Quo- Warranto and Certiorari,  whenever these rights are violated. It must, however be clearly understand that fundamental rights are not absolute rights. They are subject to certain restrictions. Thus our constitution tries to strike a balance between the individual liberty and the social interest. The idea of incorporating a bill of rights has been taken from the constitution of the United States. But the guarantee of individual rights in our constitution has been very carefully balanced with the need for security of the state itself.
(check it out.... Writs / Constitutional remedies)

The Directive Principles of State Policy contained in part IV of the Constitution set out the aims and objectives to be taken up by the states in the governance of the country. Unlike the fundamental rights, these rights are not justifiable, If the state is unable to implement any provision of part IV, no action can be brought against the State in A Law court . For this want of enforceability there has been much criticism. But the criticism is not justified. Though by their very nature they are not justifiable in the court of law, yet the state authorities have to answer for them to the electorate at the time of election. The idea of a welfare state envisaged in our constitution can only be achieved if the state endeavour to implement them with a high sense of moral duty.

7) A Federation with strong centralizing tendency -

The most remarkable feature of the Indian Constitution is that being a federal constitution it acquires a unitary character during the time of emergency. During the proclamation of emergency the normal distribution of powers between the centre and state undergoes a vital change . The union Parliament is empowered to legislature legislate on any subject mentioned in the state list. The central government is empowered to give direction to states as to the manner in which it should exercise its executive power. The financial arragement between the centre and state can also be altered by the union government. Thus during the proclamation of emergency All Powers are centralised In the union government and constitution acquires a unitary character. This combination of Federal and unitary system is unique your future of the Indian Constitution.  This feature of the Constitution can be better understood in the historical background upon which the federalism has been introduced in India and also in the light of the experience and other federal countries.

8) Adult suffrage. -
The old system of communal electorates has been abolished and the uniform adult suffrage system has been adopted. Under the Indian Constitution every men and women above 18 years of age has been given right to elect a representative for the legislature. The adoption of the universal adult suffrage (Article 326) without any qualification either of sex, property ,taxation or the like is a bold experiment in India having regard to the vast extent of the country and its population with an overwhelming illiteracy.  This suffrage is wider than all the democratic countries which have given Right to Vote to their people. In spite of many difficulties, this bold experiment has given Crowned with success. This is evident with the increase the number of voters on the electoral rolls in the general elections.

Mere enumeration of a number of Fundamental Rights in a constitution without any provision for their proper safeguards will not serve any useful purpose. Indeed, the very existence of a right depends upon the remedy for its enforcement.  Unless there is a remedy there is no right, goes a famous maxim . for this purpose and independent and impartial Judiciary with the power of Judicial review has been established under the constitution of India. It is the custodian of the rights of citizens besides, in a federal constitution it plays another significant role of determining the limits of power of the centre and States.

A secular state has no religion of its own has recognised religion of state .It treats all religions equally.  The Preamble declares the resolve of the people of India to secure all  its citizens "Liberty of....belief , faith and worship."  Article 25 to 28 of the Constitution give concrete shape to this concept of secularism. (Check it out... Religious freedom under the Constitution of India, Article 25 to 28 ) It guarantees to every person the freedom of conscience and the right to profess ,practice and propagate religion in a secular state the state only regulates the relationship between man and man. It is not concerned with the relationship of man with God. One may worship God according to the dictates of his own conscience. However it is to be noted that the freedom of religion is not an absolute freedom, but subject to the regulatory power of the state. In the name of the religion nothing can be done which is against public order, morality and Health of the public. Secularism is also subject to democratic socialism. Religious freedom cannot, therefore we used to practice economic exploitation. The right to acquire own and administrator Property by religious institutions is subject to the regulatory power of the state.

(Check it out.... What is religion under the Constitution of India)

(Check it out.. Who is citizen of India)

1) To abide by the constitution and respect its ideals and institutions, the national flag and national anthem;
2) To cherish and follow the noble ideals which inspired our  National struggle for freedom;

3) To uphold and protect our Unity, integrity of India;

4) To defend  the country and render national service when called upon to do so ;

5) To promote harmony and spirit of common Brotherhood among the people of India transcending religious, linguistic , and regional or sectional diversities, to renounce practices derogatory of the dignity of women;

6) To value and preserve the rich heritage of our composite culture.

7) To protect and  improve the natural environment including forests, Lakes Rivers and wildlife and to have compassion for living creature.

8) To develop the scientific temper, in humanism and the spirit of enquiry and reform

9) To safeguard public property and to abjure  violence;

10) To strive towards excellence in all spheres of individual and collective activity so that the nation constantly rises to higher levels of endeavor and achievements .