What are Essential characteristics of Federal Constitution? 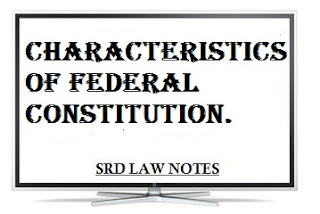 Distribution of power is an essential feature of federalism. Federalism means the distribution of the powers of the state among a number of co-ordinate bodies bodies each originating in and  controlled by the constitution. The basis of such distribution of power is that in matters of national importance, in which a uniform policy is desirable in the interest of the units, authority is interested to the union , and matter of local concern with the states .

2) Supremacy of the Constitution -

A  Federal constitution must almost necessarily be a written Constitution. The foundations of a federal state are complicated contracts. It will be practically impossible to maintain the Supremacy of the Constitution unless the terms of the Constitution have been reduced  into writing.  To base an arrangement of this kind upon understanding or conventions would be certain to generate misunderstandings and disagreements.

The Indian Constitution possess all the essential characteristics of a Federal constitution mentioned above.
Author Unknown