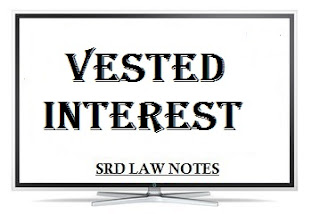 A vested interest is not defeated by the death of the transferee before he obtains possession.

An intention that an interest shall not be vested is not to be inferred merely from a provision whereby the enjoyment thereof is postponed, or whereby a prior interest in the same property is given or reserved to some other person, or whereby income arising from the property is directed to be accumulated until the time of enjoyment arrives, or from a provision that if a particular event shall happen the interest shall pass to another person.

A Hindu widow adopted son but there is an agreement which postpones the sons estate during the lifetime of widow. Here an interest created in favour of adopted son is vested right, which does not depend upon condition precedent, for example.. performance of any act , it is not to take effect on happening of the event which is certain  i.e. the death of widow.

Where, on a transfer of property, an interest therein is created for the benefit of a person not then living, he acquires upon his birth, unless a contrary intention appears from the terms of the transfer, a vested interest, although he may not be entitled to the enjoyment thereof immediately on his birth.

1) Vested interest does not depend upon the fulfillment of a condition.  It creates present and immediate right though the enjoyment may be postponed to future date.

2) A vested interest is not defeated by the death of transferee before obtaining possession, it will pass on To His heirs.

3) Vested interest is Transferable and heritable.

In this case the Allahabad High Court held that in a vested interest the title passes absolutely from the transferor  to the transferee at the date of the transfer, though the enjoyment may be postponed.

One Ramani Kanta Roy executed a registered trust deed in respect of his properties. The eldest son Rajesh was appointed the sole Trustee to hold the properties under the trust subject to certain power and obligation. After his death his two son Rajesh And Ramendra got interest in the property. There was a clause in the trust deed that both of them was to get interest in the properties allotted to each other happening of the two events -
1) Discharge of all the debts specified in the schedule and death of the settler himself.

2)  The trust was to come to an end on the death of settler  and the son  were to get properties allotted to them there after.

Issue before the court was whether the interest created by the trust were vested or contingent ?

Check it out...  Difference between vested interest and contingent interest