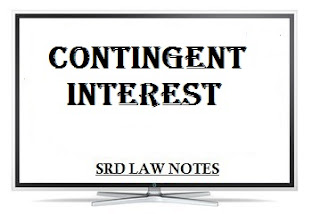 Where, under a transfer of property, a person becomes entitled to an interest therein upon attaining a particular age, and the transferor also gives to him absolutely the income to arise from such interest before he reaches that age, or directs the income or so much thereof as may be necessary to be applied for his benefit, such interest is not contingent.

'X' bequeathed  his property i.e. estate to 'Y' until he shall marry  to 'Z'.  'Y's interest in the bequeath is contingent because it depends upon a condition precedent i.e. a marriage of 'Y' with 'Z'. An event has no proprietary interest in the estate and cannot alienate it.

But as soon as 'Y' marries with 'Z' his  contingent interest becomes vested interest.

Transfer to members of a class who attain a particular age (Check it out...  Transfer to class )

Where, on a transfer of property, an interest therein is created in favour of such members only of a class as shall attain a particular age, such interest does not vest in any member of the class who has not attained that age.

Where, on a transfer of property, an interest therein is to accrue to a specified person if a specified uncertain event shall happen, and no time is mentioned for the occurrence of that event, the interest fails unless such event happens before, or at the same time as, the intermediate or precedent interest ceases to exist.

Section.24 - Transfer to such of certain persons as survive at some period not specified

Where, on a transfer of property, an interest therein is to accrue to such of certain persons as shall be surviving at some period, but the exact period is not specified, the interest shall go to such of them as shall be alive when the intermediate or precedent interest ceases to exist, unless a contrary intention appears from the terms of the transfer.

A transfers property to B for life, and after his death to C and D, equally to be divided between them, or to the survivor of them. C dies during the lifetime of B. D survives B. At B's death the property passes to D.

A) A contingent interest is solely depending upon the fulfillment of a condition.

B) If the transferee dies before obtaining possession the continent interest fails and property revert to transferor .

C) Contingent interest is Transferable, whether it is heritable or not depend upon the nature of such contingency.

In this case the Allahabad High Court held that in a vested interest the title passes absolutely from the transferor  to the transferee at the date of the transfer, though the enjoyment may be postponed.

One Ramani Kanta Roy executed a registered trust deed in respect of his properties. The eldest son Rajesh was appointed the sole Trustee to hold the properties under the trust subject to certain power and obligation. After his death his two son Rajesh And Ramendra got interest in the property. There was a clause in the trust deed that both of them was to get interest in the properties allotted to each other happening of the two events -

1) Discharge of all the debts specified in the schedule and death of the settler himself.

2)  The trust was to come to an end on the death of settler  and the son  were to get properties allotted to them there after.

Issue before the court was whether the interest created by the trust were vested or contingent ?

A Supreme Court held that the interest taken by the two brothers under the trust deed was vested and not contingent because it was certain event.