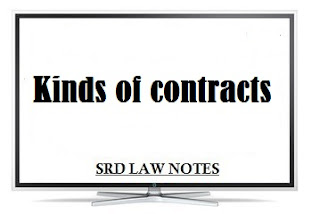 A) There must exist an agreement. and

B) The agreement should be enforceable by law.

A contract to be enforceable, it must contain the constituents enshrined in Section 10 of the Indian Contract Act 1872. According to Section 10 of the Act, a contract it said to be valid, if two or more competent parties freely consented to  enter into an agreement not declared void with a lawful object for a lawful consideration .

All agreements are contracts if they are made by the free consent of parties competent to contract, for a lawful consideration and with a lawful object, and are not hereby expressly declared to be void.
Nothing herein contained shall affect any law in force in India, and not hereby expressly repealed, by which any contract is required to be made in writing or in the presence of witnesses, or any law relating to the registration of documents.

Every contract is an agreement but every agreement is not a contract. An agreement  becomes a contract when the following conditions are satisfied....

a) There is some consideration to contract .

b) The parties are competent to contract .

d) There object it heir lawful.

The privy council in MohriBibi Vs Dharmadas Ghose, (1903 30 IA  Cal. 539) laid down that, "a contract entered into with a minor is void ab initio for example not enforceable.
Section 24 to 30 and 56 of the Indian Contract Act ,1872 lay down the provisions relating to the agreements which are declared void as stated below...

a) Agreement of which consideration and objects are unlawful in part (Section 24).

1) A promises to obtain for B an employment in the public service, and B promises to pay 1000 rupees to

A.  The agreement void, as the consideration for it is unlawful.

2) A promises B to drop a prosecution which he has instituted against B for robbery and B promises to restore the value of things taken.  The agreement is void as its object is unlawful.

A contract entered into out of coercion, undue influence , fraud, misrepresentation, mistake etc, it is said to be voidable . According to Section 19 of the Indian Contract Act 1872.

An Unenforceable contract is a contract, which is valid for all practical purposes until and unless its validity is challenged/  questioned. It cannot be enforced due to some Technical defect. It can be enforced in future after the technical defect is removed.

A and B enter into an agreement to commit an illegal act ( e.g to carry on some business or to undertake some work Forbidden by law)  or a legal act by illegal means ( for example... admission into Engineering/ medicine ignoring/ violating the rules/  merit) .
Author Unknown

Email ThisBlogThis!Share to TwitterShare to Facebook
Labels: Law of Contracts