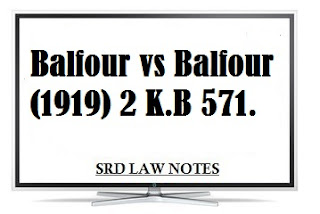 The defendant in the instant  case was a Civil Servant  at Ceylon . When he left for England he promised to his wife ( plaintiff)  to send £30 per month but he did not send the same amount as promised. The plaintiff (wife) filed a Suit against her husband.

Lord  Atkin dismissed the above suit as it is not actionable/maintainable on the ground that it does not give rise to legal consequences.

The issue or question was involved in the instant case is, "whether the  said agreement between the husband and wife for monthly allowance gives rise to create any legal relationship for  enforceability ?

An agreement to be enforceable, it must give rise to legal relation / consequences. Social agreement / contract does not create legal relationship between among the parties.
Lord Atkin in the instant case , observed that,   "There agreements between parties, which do not result in contracts within the meaning of that term in our law. The most usual forms of agreement which do not constitute a contract are the agreements made between husband and wife. They are not contracts because the parties do not enter intend that they should be attended by legal consequences."  Therefore the suit was dismissed.