Transfer to take effect on failure of prior interest

It is a settled principle of law that the transfer for limitation upon limitation his void.
Any limitation depending upon A Prior limitation which is void for remoteness is also void. 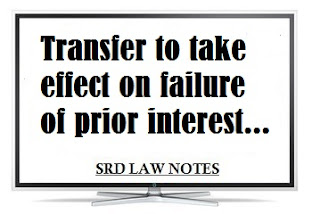 Transfer to take effect on failure of prior interest
Section 16 of Property Act provides Where, by reason of any of the rules contained in sections 13 and 14, an interest created for the benefit of a person or of a class of persons fails in regard to such person or the whole of such class, any interest created in the same transaction and intended to take effect after or upon failure of such prior interest also fails.

The rule embedded in this section is the rule of English law that be a limitation following upon the limitation void for remoteness is itself void even though it may not affect rule against perpetuity, for example.. Thus section 16 can be invoked or attracted only with Prior interest fail by reason of either section 13 or section 14 . Thus if the prior interest is void or fail for some other reason, the subsequent interest does also fail.

The restrictions contained in section 14, 15,16 and 17 do not however apply  to the Transfer of Property for the benefit of public and object beneficial to mankind .

In this case one sugga gave away property to Ramkali, her nephew's daughter, for life and then to Ramkali's male descendants, if she should have any absolutely, but if she should have no male descendants , then to Ramkalis unborn daughter for life, but if there was no issue of B ,male or female then  to her nephew, Datadin B died without issue. It was held that the gift in favour of Datadin was  dependent upon the failure of the Prior interest in favour of the daughters and accordingly the gift in favour of Datadin also failed.

In short.... when an interest fails  by reason for any of the rules contained in section 13 and 14, any interest created in the same transaction and intended to take effect after such prior  interest also fails. In other words, they valid transfer which is subsequent and dependent upon a void transfer is itself is rendered void.
Author Unknown