It is a Landmark case of pre-emergency period. The Court interpreted Article 21 and gave it a new dimension and held how it is related to Article 19. Supreme Court held the expression ' personal liberty' in Article 21is of widest connotation to uncovers a variety of right which goes to constitute  personal liberty of man and some of them having raised to the status of distinct fundamental rights and given additional protection under Article 19. 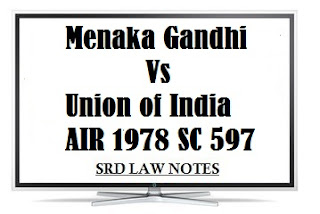 Fact of the case -

The petitioner passport was impounded by and order dated 2 July, 1977. The government  of India declined to furnish  reasons for its decision in the public interest. In a petition under Article 32, the petitioner contended ---

1)  That Section 10 (3) (C)of passport Act 1967,which authorities impounding of passport in the interest of general public violated Article 14 as it gives vague discretionary powers to passport authority.

2)  That Section 10 (3)  (C) was void as it conferred arbitrary power and did not provide for hearing of the holder of the passport.

3) That section (10) (3) (c) violated Article 21 as it did not prescribe a procedure within the meaning of Article 21. Even if it was held that procedure was prescribed it was arbitrary and unreasonable .

4) That Section 10(3) (c)  violated article 19 (1) (a) and (g) .
In an affidavit before the court government disclosed that passport was impounded as her presence was necessary before a commission of inquiry.

The supreme court held that Section 10 (3)(c) did not violate Article 14 ,19 (1) (a) or (g) or 21. Though the court held that the order suffered from infirmities in so far as good enough for reasons we were not given and the petitioner has no opportunity of showing that reason given by Government did not exist or had no hearing on 'public interest' yet majority of the court refused to interfere with the order in view of statement made by Attorney General that the  petitioner could make a representation which will be dealt with expeditiously  and that impounding would not exceeded period of 6 months. Only C.J Beg took the view that the order was neither fair nor procedurally proper and that he would quash  the order and direct the passport authority, that passport to be returned to the petitioner.

Menaka Gandhi overruled A.K. Gopalan. After Menka Gandhi's case the view of the judges was completely changed and they started interpreting Article 21 in a wider sense. Menaka Gandhi ruling has brought tremendous change in the criminal administration of justice.

In this case majority held that -

A) Law depriving  life and personal liberty must be fair and just and reasonable.

B) Procedure taking away life and personal liberty must be fair and just and reasonable.

C) The law and procedure must not be arbitrary, fanciful or evasive.

D) There is a interlink in Article 19 and 21. No One Article in the constitution can be read in isolation. for example,  separately each article has a link with other article....
Author Unknown