Home » Constitutional Law » Can Preamble be amended under Article 368 ??

Can Preamble be amended under Article 368 ?? 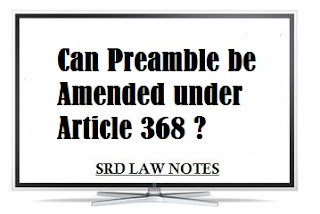 Can Preamble be Amended under Article 368 ??

The Preamble declare that the people of India resolved to constitute their country into a sovereign democratic Republic. No one can suggest that these words and expressions are ambiguous in any manner. An amending power cannot be interpreted so as to confer power on the Parliament to take away any of these fundamental and basic characteristics of policy." It is submitted that this view of the court is correct. The amendment power cannot change the constitution in such a way it is ceases  to be a sovereign, democratic, republic, it can only be done by wrecking constitution.

(Check it out.... 42nd constitution Amendment and The Preamble)
Author Unknown