Punishment for Contempt of Court. 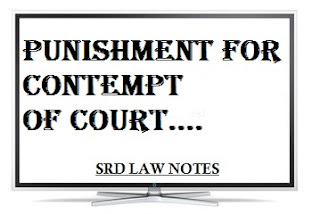 Punishment for Contempt of Court -

(1) Save as otherwise expressly provided in this Act or in any other law, a contempt of court may be punished with simple imprisonment for a term which may extend to six months, or with fine which may extend to two thousand rupees, or with both.
Provided that the accused may be discharged or the punishment awarded may be remitted on apology being made to the satisfaction of the court.

Explanation –
An apology shall not be rejected merely on the ground that it is qualified or conditional if the accused makes it bona fide.

(2) Notwithstanding anything contained in any law for the time being in force, no court shall impose a sentence in excess of that specified in sub section for any contempt either in respect of itself or of a court subordinate to it.

(3) Notwithstanding anything contained in this section, where a person is found guilty of a civil contempt, the court, if it considers that a fine will not meet the ends of justice and that a sentence of imprisonment is necessary shall, instead of sentencing him to simple imprisonment, direct that the he be detained in a civil prison for such period not exceeding six months as it may think fit.

(4) Where the person found guilty of contempt of court in respect of any undertaking given to a court is a company, every person who, at the time the contempt was committed, was in charge of, and was responsible to, the company for the conduct of business of the company, as well as the company, shall be deemed to be guilty of the contempt and the punishment may be enforced, with the leave of the court, by the detention in civil prison of each such person.

Provided that nothing contained in this sub section shall render any such person liable to such punishment if he proves that the contempt was committed without his knowledge or that he exercised all due diligence to prevent its commission.

(a) “Company ” means any body corporate and includes a firm or other association of individuals, and

(b) “Director” in relation to a firm, means a partner in the firm.

According to Section 13 of contempt of courts Act 1971, notwithstanding anything contained in any law for the time being in force no court shall be impose a sentence under this act for a Contempt of court unless it is satisfied that the contempt is of such nature that it substantially interference or tends  substantially to interfere with the due course of justice.
S.20 Limitation for actions for contempt
No court shall initiate any proceedings if contempt, either on its own motion or otherwise, after the expiry of a period of one year from the date on which the contempt is alleged to have been committed.
Author Unknown