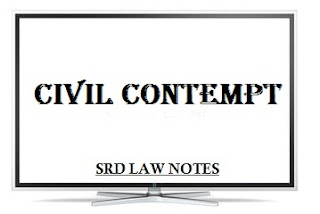 I) Vindication of the public interest by punishment of contemptuous conduct; and

II) coercion compel the contemner to do what the court requires of him.

To constitutes 'civil contempt' the following are required to be proved...

A) there is disobedience of the order, decree etc. of the court or breach of undertaking given to the court.

B) The disobedience or breach is wilfull.

When the court orders a person to do something or not to do something , it is incumbent on that party to comply with that order forthwith. The person disobeying the order of the court will alone be responsible for the consequence and he cannot be heard to say that he referred the matter to his higher officer.

The essence of the Civil contempt is willful disobedience to any judgement, decree,  direction, order or writ of a Court, and not Mere inaction to give effect to it. The conduct of the alleged contemner must be wilful showing deliberate and conscious disregard of the courts order , or a despising or disdainful attitude towards the verdict of the court .

Whether the disobedience has been wilful or not is an issue to be decided by the court taking into account the facts, the circumstances of the case.
Author Unknown