Types Of Accounts / Classification of Accounts 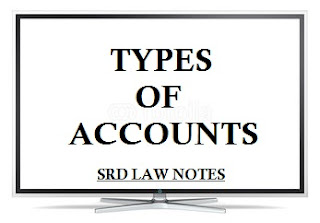 In previous post we discussed about Object ,Importance and utility of book-keeping

we have seen whatever the size of business may be, every business has dealing with...
a) Persons or Institutions
b) property or things and;
c)  Services or uses i.e. expenses and income .
Thus all the transactions of any business are in report of these three elements only and hence account are also classified into three categories..

1) Personal Account -
Accounts representing persons, firms, Companies, Associations, Clubs or any other institutions. with whom the business deals are called personal accounts.

Personals accounts may be classified as under....

c) Representative Personal Account-
These account represent persons . However instead of opening individual account of each person , the amounts due to various parties are grouped under the same head of expense or income . i.e. Salaries due to numbers of workers but not paid is shown under the heading 'Outstanding salaries Account  '. Similarly interest due to business from various parties but not received is shown under the heading 'Outstanding interest account . thus outstanding salaries A/C or  outstanding Interest account is a representative account. Similarly income received in Advance a/c or expenses prepaid A/c is a representative personal account.

This accounts called real accounts because they represent something really existing i.e. some tangible things, (however, accounts of some tangible assets like goodwill, trade marks, copyrights also come under this category.)