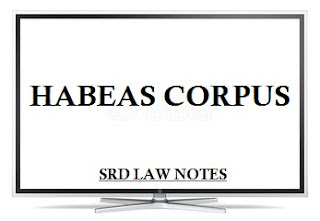 Habeas Corpus is a latin  phrase means 'have the body' or 'produce body'  before the court. This is a writ in the nature of an order calling upon the person who has detained another to produce him before the court, in order to let the Court know what ground he has been confined and to set him free before if there is no legal justification of imprisonment. In other words , by this writ , the court directs the person or authority that has detained another person to bring the body of prisoner before the court so that court may decide the validity, jurisdiction or justification of such detention.

What is object of Writ ?

The writ of habeas corpus provides a prompt and effective remedy against illegal detention , to release a person from illegal detention and not to punish the detaining authority. The person illegally detained may make an application for the writ of habeas corpus. But if the prisoner himself unable to make such application, any other person related to him having interest in the prisoner but not a total stranger can make it.  A Writ of habeas corpus may be issued against any person or authority that has illegally detained or arrested the prisoners. The Court may award monetary compensation to the person who has been illegally arrested or detained .
Rudal Shah v/s State of Bihar, 1983, Rs 35,000 by way of compensation was given for fourteen years detention in jail after acquittal order.