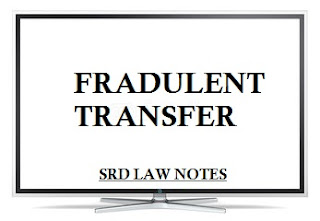 A transferee from such debtor will be protected -- :

A) if he acquires property for value in good faith without the knowledge of transferor's intention.
B) if the himself is a creditor and the transfer is made in satisfaction of his pre-existing debt.
If the creditor established that transfer was made with the     object of defeating him, the shifts on the transferee to prove ---)

1) that he had paid a fair price, and
2) that he was not a party to he fraud.
Author SRD