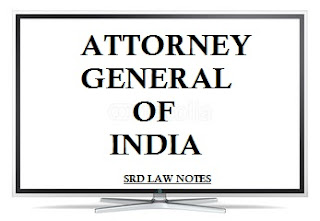 1) Appointment -
The president of India Under Article 76 shall appoint Attorney General for India.

2) Qualification -
He is qualified to be appointed as a judge of Supreme Court.

3) Term -
He hold the office during the pleasure of President .

4) Salary -
As may be determined by  President

Duties and power OF Attorney General -

I) He gives advice to Government of India upon such legal matters as may be referred to him or assigned to him by President Art.72.

II) He also discharges the functions which are referred  on him by or under the constitution or any other law.

IV) He represent the government of India in any reference made by the president to the Supreme court. under Art.143.

V) He is required to appear in any High court in India in any case in which Government of India is concerned.


1) He has right to audience in all courts in India .

2) He has right to take part in the proceeding of either of House of parliament or Joint sitting or Parliamentary committees (Art.88) but he has no right to vote.

3) He is equal to M.P.(Member of Parliament ) and enjoys all the privileges and rights available to the M.P.

Conclusion-
In India Attorney Attorney General is appointed on the basis of professional competence and not on political considerations. He is a non-party man and he is not a member of the cabinet.