Home » Law of Tort » How tort can be discharged? Explain various modes of discharging torts.

How tort can be discharged? Explain various modes of discharging torts. 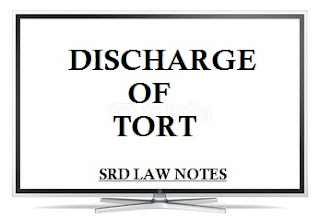 Question - How tort can be discharged? Explain various modes of discharging torts.
Answer -

Even if tort is tort is committed and liability exists,  under certain circumstances this vested right of action may be discharged.  In this cases the wrong is not justified but the remedy for the wrong cases to operate.  Discharge of torts differs from justification of tort.Justifications are exceptions,under certain circumstances the wrong is justified in doing it.  Rule of non liability is provided.  It is excused, justified.

In discharge of tort,  the circumstances are such the liability exist but remedy does not exist . The meaning of discharge of tort is coming to an end of the tort.  It is a process by which tort cease to exist and wrong doer is not liable for the wrong committed by him.

2) Grounds for discharge of tort -

Following are the grounds for discharge of tort .

A) Death of the parties -

I) death of wronged person - against whom the tort is committed

II) death of wrong doer who has committed tort.

In case of death of wronged person the legal heir can claim damages from the defendant for proprietary wrong i.e. tort against property I.e trespass,  nuisance, negligence, fraud, waste etc.  But for personal tort defendant cannot be sued .  Even in case of death of the wrong doer the legal heir of deceased are not liable for personal tort of wrongdoer.Personal torts are those torts, which are affecting mind, and body of person e.g assault, battery, false imprisonment, defamation etc.

In case of personal tort legal heir of wrong doer are not liable but in case of proprietary torts legal heirs are liable.

B) Accord and satisfaction -

Accord means an agreement,  whereby a person agrees to accept some valuable consideration in lieu of right of action that he has against the other. Satisfaction means actual payment of amount of consideration so agreed to when there is an agreement and it is satisfied by its executors,  the arrangement is termed as accord and satisfaction and it discharged the tort.  The consideration may be treated in money or compensation which is accepted by a wronged person or his legal heirs and thereby settled the dispute and do not proceed in court of law.

A release is the giving up or discharging the right of action which man has or may have against another man. The wronged or aggrieved person gave up the entire claim or discharged right which he has against the wrongdoer.  This release should be voluntary and should not be obtained by threat,  compulsion or force.  In England the release should is with consideration and in writing but it is valid even without consideration and in writing.  The injured, wronged person does not proceed in court of law against wrongdoer.  A lease executed under mistake or in ignorance of one's right obtained by fraud is not valid. A covenant not to sue one of the two joint tort-feasor,  doesnot operate as a release so as to discharge the other.

The law prescribes time limit within which an action must be brought for the wrong and if this proscribed period is over, expired the right of action is barred and remedy ceased to operate. Law helps to those only that is diligent about their right.  Delay defeat equity.  Law will not help to those who were sleeping over there right for pretty long time. In England the Limitation Act,1939 as amended by law reform (Limitation of actions ,etc) Act,1954 , fixes the time during which action of tort must be brought. Indian Limitation Act, 1963, Provides the prescribed period during which existing right can be enforced in the court of law.  It does not create or define any cause of action. The object of the limitation Act is to enable the parties to file suit within certain period and forbid them from filing suit after period.  The object of limitation is to ensure private justice,  to suppress fraud and perjury and to quicken diligence and to prevent oppression.

Where a man has more than one remedy for a tort and he elects to pursue one of them,  giving up others,  the other remedies are waived.  He cannot pursue them if he fails in the one elected. Waiver is express or implied ; express when the person entitled to anything expressly and in terms gives it up, in which case it nearly resemble release ; implied,  when the person entitled to anything does or acquiescence in something else which is inconsistent with that to which he is so entitled.  Thus, if the defendant obtains the plaintiffs money by fraud or other wrong, the plaintiff may sue him in tort or for money had received.  Similarly, if a man is wrongfully deprived of his goods, which are afterwards sold, he may bring an action  for the tort, or he may sue for the  price recieved by the defendants.
Waiver means to give up . The aggrieved or wronged person gave up his right of action against the wrong doer for some reason and do not proceed in court of law.

This shows an inactivity of person.  The aggrieved person do not proceed in court of law because ot his own incapacity e.g. if he has no money to pay court stamp fee or an advocates fee, or he dont have time to go court of law and file the suit for compensation.  Where a person who knows that he is entitiled to enforce a right,  neglects to do so far a length of time, the other party may fairly infer that he has waived of abandoned his right.  But to deprive man of his legal remedies there must be something more than delay.

READ MORE ABOUT LAW OF TORT....

Some Definitions of Tort

Categories of wrongs
Some Important Definitions of "Tort"