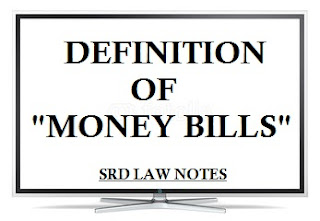 1) for the purpose of this ,chapter, a bill shall bye deemed to be a Money Bill if it contains only provisions dealing with all or any of the following matters namely ---

2)  A bill shall not deemed to be a money bill by reason only that it provides the imposition of fines or other pecuniary penalties, or for demand or payment of fees for lincences or fees for services rendered,  or by reason that it provides for the imposition, abolition, remission, alteration,or regulation of any tax by any local authority or body for local purposes.

3) If any question arises whether a bill introduced in legislature of a state which has a legislative council is a Money  Bill or not the decision of the speaker of legislative assembly of such state thereon shall be final.

4)  There shall be endorsed on every Money bill when it is transmitted to the legislative council under Article-198 and when it is presented to the governor for assent under article 200, the certificate of the speaker of legislative assembly signed by him that it is a money bill.