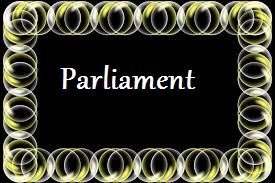 Indian Parliament is bicameral. The lower house is designed as 'House of People ' or 'Lok Sabha'. On the other hand upper house as 'Council of states 'or 'Rajya Sabha' this two houses alongwith the President constitute Parliament and all this three organs are essentials to the process of legislation by the Parliament. The two houses of Parliament in India differ from each other in many respects. They are constituted on entirely different principles.

Lok-Sabha is a popular chamber and is elected directly by the people. The maximum strength of the Lok-Sabha has been fixed 550 members of whom not more than 530 are elected by the voters in the states and not more than 20 represent the union territory

The maximum strength of Rajya-Sabha has been fixed at 250 members,  238 members are elected representative members of the states and the union territories and 12 members are nominated by President from among those who have special knowledge or practical experience of such matters as literature, science, art and social services. The seats are allotted on the basis of population of the states and union territories.  The members of Rajya-Sabha are elected indirectly and the term of elected members is ot 6 years.

Rajya-Sabha is continuing body and itvis not subject to dissolution. 1/3rd. Of its member retire after every two  years and their seats are filled up by fresh election and presidential nomination.
Author SRD