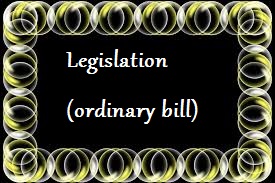 Making law is major function ot the Parliament.  The socio and economic problems are changing constantly that demand new laws and hence Parliament spends a good deals of its time on legislative activity.

Ordinary bill is a bill other than money or financial bill . It may be introduced in either house of  Parliament. It becomes an act when it is passed by both houses and is assent by the President.

The procedure of passing of bill in a house is contained in the rules of procedure of each house. A bill passes through the three stages,  popularly known as reading ina house.  The first stage is introduction bearing . If the bill
Is very controversial then there is discussion on the bill. The second stage is consideration which has two parts-

1) a general discussion of principles and provisions of the bill.


2) it's Clause by Clause consideration.

The general discussion takes place on a motion either that the bill taken into consideration or that it may be refer to a select committee or that it be circulated for eliciting public opinion.
An important bill is usually referred to the select committee of the house or to a joint select committee of the both houses. After the report of committee is presented to the house the bill is discussed again clause by Clause Amendments to clause may be moved at this stage at the final the third reading stage, after a brief general discussion ,the bill is finally passed. After its passage in the one house the bill is transmitted to the other house where it undergoes more or less similar procedure.


Joint Section -
An ordinary bill has to be passed by both the houses before it can be submitted to the president for his assent under Article 107(2). If a bill passed by one house is amended by other house, the amended bill is send  back to the original house for its concurrence with the amendments so made. Usually the two houses agree and finally pass the bill in the same form.
It may however, happen at times that two houses do not agree on a bill and a deadlock may arise between them. Such deadlock is resolved through a joint session of the houses. Thus when a Bill is passed by one house and transmitted to the other house.

3)if the other house does not pass it for more than 6 months.
The president may summon a joint session of both the houses under Article 108(1). No joint session can be called if the bill has already lapsed by the discussion of Lok-Sabha.
At the joint sitting, the speaker of Lok-Sabha, or in his absence such person as may be determined by the rules of procedure is to preside . The rules of procedure with respect to joint sitting of the two houses are to be Made by the president after consulting the chairman of Rajya-Sabha and the speaker of Lok-Sabha.  A bill passed with or without amendments , by a majority of all the members present and voting in the joint session, is deemed to have been passed by both the houses.
Since the commencement of the constitution of India, the provision regarding the joint sitting session of the two houses has been invoked only for three times -


President's Assent -
The assent of the president is required for a bill to become law as the part of the Parliament.  Hence, when a bill passed by the both houses is sent to the president for his assent.

1) He may either give or withhold his assent thereform ; or

2) May sent it back to houses for reconsideration. And for considering the desirability of introducing such amendment as he may suggest.

When bill return for reconsideration to the houses, it is the duty of each house to reconsider it accordingly and if it is passed again with or without amendment and sent for the assent of the president then president shall not the assent thereform.
If the president refuses to give his assent to a bill.  He has exercise the veto and the bill be dead .
Instances where President of India refuses to assent the bill.

2) 2nd bill of a member of Parliament,  remuneration and allowances

3) Ordinance for reservation for Dalit chirstians.