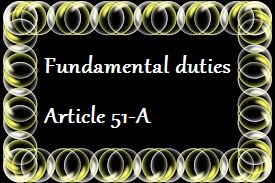 As fundamental rights are necessary for individual to develop their personality. It is also necessary that they should discharge their obligations towards their fellow-citizens and the motherland. Here only fundamental rights would not make them good citizens. Normally right imply also duties . They are two sides of the coin. But very few people realise thisand therefore, it has became necessary to make people aware about their duties towards motherland and fellow citizens.

Art.51-A lays down that- "it shall be the duty of every citizen of India".

a) To abide by the constitution and  respect its ideals and institutions the  national flag and national anthem .

b)to cherish and follow the noble ideals which inspired our national struggle for freedom.

c) to uphold and protect the sovereignty, unity and integrity of India.

d) to defend the country and render national service when called upon to do so.

e) to promote harmony and the spirit of common brotherhood amongst all the people of India transcending religious, linguistic, and regional or sectional diversities , to renounce the practices derogatory of the dignity of women.

f) to value and preserve the rich heritage of our composite culture.

g) to protect and improve the national environment including forest, lakes, rivers and wildlife and to have compassion for living animal.

h) to develop the scientific temper, humanism and the spirit of inquiry and reform.

I) to safeguard public property and to abjure violence.

j) to strive towards excellence in all sphere of individual and collective activity, so that the nation constantly rise to higher levels of endeavour ans achievement.