Rule against Perpetuity and exceptions to this Rule 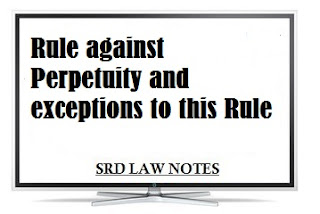 It is basic rule of Transfer of Property that one must enjoy the property absolutely during his lifetime. One cannot be deprived  of his right of enjoyment in respect of the property as he like in his lifetime. The policy of the law has been to prevent property from being tied up forever. Perpetuity is an interest, which will not vest till  a remote period. One cannot postpone the vesting of the property in the transferee beyond a certain limit. The period for which vesting may be lawfully postponed is called :perpetuity period '.

No transfer of property can operate to create an interest which is to take effect after the life time of one or more persons living at the date of such transfer, and the minority of some person who shall be in existence at the expiration of that period, and to whom, if he attains full age, the interest created is to belong.

The rule against perpetuity in short - ' vesting cannot be postponed beyond the life of living person and minority of Unborn person'. This provision permits perpetuity up to certain period, beyond that period law does not allow perpetuity.

The head note is wrongly worded or Framed, because Section 14 allows to certain extent the postponement of vesting and therefore the title should have been 'rule of perpetuity'.

2) The vesting of absolute interest in favour of an Unborn person maybe postponed until he attains full age. for example an estate may be transferred to A, living person, and after his death To His unborn son when he attains the age of 18. Such a transfer would not be violative of the rule against perpetuity.

The general rule is that disfavour perpetuity and it is based on the following Grounds..

Sir D. Mulla "Liberty of alienation shall not be exercised or used for its own destruction. This is because if the owner having inherent power to transfer the property uses the right to the extreme and he thereby destructs the further right of alienation of future transferee.

If perpetuities are allowed the property which is the subject matter of the transfer will become ex-commercial, for example put out of Commerce.  Though the transferee receives the property, he has no power to alienate it .

Sir D. Mulla , " It is illogical to imagine at dead person below his Grave controlling properties above his grave."

2) property transferred to A for life then B for life both A and B are leaving at the date of the transfer. The transfer is valid.


Exception to the rule against perpetuity

following are the nine exception to the rule against perpetuity .

1) vested interest is not affected by the rule because once the interest are vested it cannot be bad for remoteness.

2) The rule is not applicable to land purchased or held  by Corporation.

3) Gift to charities, the rule does not apply to transfer for the benefit of public for religious, pious, or charitable purposes.

5) The rule against perpetuity does not apply to Personal agreement. for example.. agreement which do not create any interest in the property.

6) A covenant of redemption in mortgage does not effect by the rules the rule.

7) The does not apply to contacts for Perpetual renewal of lease.

8) The rule also does not apply where only charges is created which does not amount to a transfer of an interest.

9) Contract of  preemption also not affected by rule against perpetuity.

Vs
Administrator general of Bombay,1896 .

In this case Bombay High Court declared that the gift void as offering against perpetuity when a  gift was made of movable property to a son with gift of shares  in the property to son's sons son  when they should attend the age of 21.

The privy Council held thar a gift to an Unborn generations is Forbidden by Mohammedan law except in the case of Wakf.

Supreme Court held that the rule against perpetuity does not apply to Personal agreements, for example....
agreements which do not create an interest in the property.

(Check it out.....  Definition of Transfer of Property and essentials For valid Transfer.)
Author Unknown