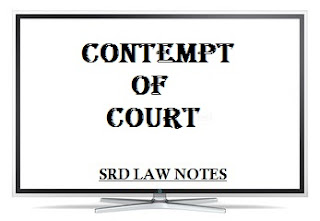 I) Vindication of the public interest by punishment of contemptuous conduct; and

II) coercion compel the contemner to do what the court requires of him.

To constitutes 'civil contempt' the following are required to be proved...

A) there is disobedience of the order, decree etc. of the court or breach of undertaking given to the court.

B) The disobedience or breach is wilfull.

When the court orders a person to do something or not to do something , it is incumbent on that party to comply with that order forthwith. The person disobeying the order of the court will alone be responsible for the consequence and he cannot be heard to say that he referred the matter to his higher officer.

The essence of the Civil contempt is willful disobedience to any judgement, decree,  direction, order or writ of a Court, and not Mere inaction to give effect to it. The conduct of the alleged contemner must be wilful showing deliberate and conscious disregard of the courts order , or a despising or disdainful attitude towards the verdict of the court .

Whether the disobedience has been wilful or not is an issue to be decided by the court taking into account the facts, the circumstances of the case.

According to S.2(c) of contempt of courts Act, 1971 , “Criminal contempt” means the publication (whether by words, spoken or written, or by signs, or by visible representation, or otherwise) of any matter or the doing of any other act whatsoever which-

To constitutes a criminal contempt. It is not necessary that the publication or other acts have actually resulted in scandalizing on lowering the authority of the court to but it is enough that the act is likely to result in scandalizing. Thus the offence of content is complete by mere attempt and does not depend on the actual deflection of justice.

' Scandalize' connotes to speak falsely  or maliciously,  to bring into reproach, dishonor, disgrace to offend the feelings, conscience or propriety of an action. Scandalize also means to offend moral feelings, and to make a public scandal of , utter false or malicious reports of a persons conduct, slander , or to  bring some or discredit or disgrace. We can say that the word scandalise is defamatory,  derogatory , false malicious, disgraceful statements regarding the person Judges.

It  is for the court  to decide whether or not the publication or act is likely to scandalise or  lower the authority of the court or interfere with due course of any judicial proceedings or administration of Justice.
The publication act will be taken as a criminal contempt, it  has resulted in scandalizing the authority of the court or interference with the due course of judicial proceedings or interfering the administration of justice of justice in any matter.

The world Publication was given very wide meaning. The publication maybe by words( written or spoken) by Signs or by visible representations or otherwise of any matter.
But in the Act , it is not clear as to whether the publication should be taken to mean publication to the general public or any kind of publication.

Abuse of the process of court calculated to hamper the due course of a judicial proceedings or the administration of justice amounts to contempt of Court.
Author SRDLawNotes