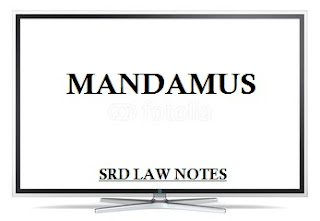 Mandamus means a command. It is an order issued by a court to a public authority asking it to perform a public duty imposed upon it by the Constituon or by any other law.  Writ of mandamus is a Judicial remedy which is in the nature of in the nature of an order from a superior Court i.e Supreme Court and a High court to any Government Court , Corporation or public authority to do or forbear from doing some specific act which that body is obliged under law to under law to do or refrain from doing , as the case may be, and which is in the nature of public duty and in certain cases of a statutory duty.


What are the conditions for the  issue of writ of mandamus ?

1) Legal Right -
The Petitioner must have legal rights . In Umakant V/s State of Bihar , 1973, Supreme court held that when the petitioner contended that the Government had promoted his juniors and he had been left out , and it was found that the petitioner was not qualified for that post, hence petition dismissed.

2) Legal duty-
A Legal duty must have been imposed on the authority and the performance of the duty should be imperative. Such duty must be statutory either imposed by the Constitution or by any other statute  or or some rule of common law but should not be contractual. If public authority invested with discretionary power abuses the power or exceeds it, or act malafide or there is non-application of mind by it or irrelevant considerations have been taken into account the writ of mandamus can be issued.


3) Good Faith -
An Application for mandamus must have been made in good faith and not for any ulterior motive. It will not be issued if designed to harass the respondent or with a view to cause personal grievances.

A person whose right has been infringed may apply for a writ of mandamus. The writ of mandamus is available against against all those bodies falling within the definition of state under Article .12 of the Constitution including Parliament and legislatures, Courts and tribunals, The Government and its officers, local authorities like municipalities , panchayats , State-owner of state-controlled corporations, Universities and other other educational institutions election authorities and other authorities.

Writ of mandamus in India is most popular writ, extensively and successfully used by aggrieved persons.