Nature,origin and Developement of Human rights 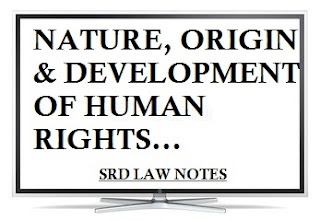 Explain the nature, origin, and development of Human rights -

The expression, ‘human rights’ is comparatively recent in origin. It has formerly and universally become recognized only after formation of the united nations in 1945. One of the basic principle object of the united nations charter is, reaffirm its faith in fundamental human rights , in the dignity and worth of the human person, in the equal rights of men and women and nations large and small.
The term, “Human rights denotes all those rights which are inherent in their nature and without which we cannot live as human beings. The Human rights being eternal part the nature of human beings are essential for the development of individual personality and human qualities. The intelligence, talent and consciences and to enable them to satisfy the spiritual and other higher demands.
Human beings are rational beings. Beings they are born as human beings, they possess certain basic and inalienable rights, which are commonly known as human rights. Since these rights belong to because of their very existence, they become operative with their birth. Human rights being the birth right are therefore inherent an all the individuals irrespective of their caste, creed, religion, sex, and nationality. Human rights are those minimal rights which every individual must have against the state or public authorities by virtue of his being a member of the human family, irrespective of any other declaration. When human rights are guaranteed by a written constitution they are called fundamental rights. Because a written constitution is a fundamental law of a state. Human rights are not created by any legislature. They assume the position of natural rights. These rights provide a suitable condition for the material and moral uplift of the people. Because of their immense significance to human beings: human rights are also sometimes referred as fundamental rights, basic rights, inherent rights, natural rights, and birthright. Human rights being essential for all-around developments of the personality of the individual in the society, being necessarily protected and being made available to all individuals. As a result, these rights have become established and guaranteed human rights. The purpose securing human rights  as such , are to provide protection  to these rights against the abuse of power committed by the organs of the state, to establish institution for the promotion of living conditions of human beings , for the development of their personality and at the same time , to provide effective remedial measures for obtaining redress in event of those rights are violated.

3 Nature and concept of human rights

There are five main theories of the philosophical approach to explain the rights of man.

3) the historical theory of rights ;

4) the social welfare theory of rights; and

5) the idealistic theory of rights.

A) The natural rights theory -

the growth of the concept of rights of man had been closely associated with the traditional natural law theories. The ancient medieval theories of natural law were more concerned with the foundations of moral, legal and political duty than with the foundation of right.
In the traditional doctrine of natural law, the rights are against other people. these rights are having corresponding duties in the sense that some other persons is under duty towards the holder of the right. The traditional doctrine of co-relatively of rights and duties its major limitation and therefore , not applicable in the modern context of human rights , for example in case of human right there is no such person or persons with whom the duties may be associated  in fact . human rights are claimed against state , its representatives and functionary. according nature right theory there are three characteristic
features of human rights -

1) Human rights are said to be recognized .

2) Human rights are to be inalienable natural and inherent

3) All human beings are said to be essentially equal.


B) The legal right Theory -

Jeremy Bentham is the supporter of this theory. According to theory , rights are the certain of the states , hence, they are neither  absolute nor inherent in the nature of man .  these rights such as rights to life , liberty or property are artificially created by the law of the land . human rights is therefore a claim which can be enforced at law and state is necessary for its protection .
Author SRD