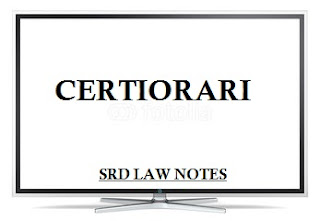 What is certiorari ? Meaning of Certiorari -

In short, Certiorariis constitutional remedy. Certirari means to certify.
This writ is issued to an inferior Court or any other authority exercising judicial or quasi judicial functions to investigate and decide the legality and validity of the orders passed by it. It is required that the judges of the inferior court to certify the record of any matter in that court and send it to the superior Court for examination.


What is the object Of Certiorari ?


The object of writ of certiorari  is to keep inferior Courts and quasi-judicial authorities within the limits of their  jurisdiction , and if they act in excess of their jurisdiction their decision can be quashed by superior courts by issuing this writ.

What are conditions for the writ of Certiorari ?

1) The judicial or quasi-judicial body must have legal authority.

2) Such authority must be an authority to determine questions affecting rights of subjects.

3) It must have duty to act judicially , and

4) It must have acted in excess of its authority.

A) Error of Jurisdiction -

In R V. Minister of transport,1934, king bench quashed the order on the ground that it was without jurisdiction and therefore ultra vires. In this case a minister who was not empowered to revoke a licence, but he revoked licence by passing an order.

In Ebrahim Aboobaker v Tek chand ,1953, Supreme court held that in absence of any provision in the relevant statute, after a death of a man, his property can not be declared evacuee property and the decision of the authority was quashed on the ground of lack of jurisdiction.

A decision of inferior Court or tribunal may be quashed by a writ of certirari, if there is an error of law apparent on the face of record.

A writ of certiorari can be issued when there is violation of principle of natural justice.