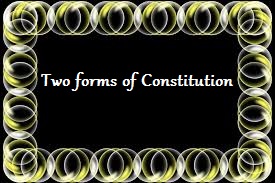 According to political scientists , Constitutions are either unitary or federal.
1)Unitary -
The powers of the government are centralized in one government.  e.g. the central government. The provinces are subordinate to the centre .
2) Federal -
In federal constitution there is division of powers between the federal and the state governments and both are independent.
Author SRD