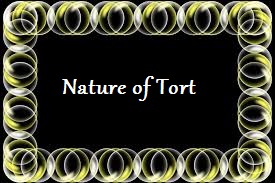 The term 'tort' is the French equivalent to the English word 'wrong' and the Roman term 'delict'. It was introduced in by Norman jurists.  The word tort is derived from the Latin term 'tortum' to twist it impliedly means conduct of any person is not straight but twisted or tortoise. It means a breach of some duty independent of contract giving rise to civil cause of action and for which compensation is recoverable .
In spite the various attempts an entirely satisfactory definition for tort still awaits its master. To provide a workable definition  in general terms,  a tort may be defined as "a civil wrong independent of contract for which the appropriate remedy is an action for unliquidated damages". A civil injury for which an action for damages will not lie is not a tort.  e.g. public nuisance for which no action for damages will lie by member of the public .
The person committing a tort or wrong  is called a tort-feasor or wrong doer,  and his misdoing is tortous act. The principal aim of the torts is compensation of victims or their independents
Author SRD