Home » Law of Tort » Difference between tort and breach of contract

Difference between tort and breach of contract 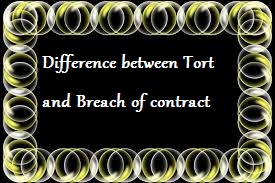 Tort
According to Salmond, A tort may be defined as a civil wrong, for which the remedy is an action for damages, and which is not solely the breach of contract or the breach of a trust or other merely equitable obligation.
Breach of Contract

Failure, without legal excuse, to perform any promise which forms the whole or part of a contract. Black’s law Dictionary

Tort being a private wrong, the party which suffers injury is required to file the suit against the defendant and at any stage of the proceedings may withdraw the suit by entering into any agreement of compromise with the defendant or even without it.

Another distinction between tort and breach of contract is that in the former the remedy is an action for unliquidated damages. That is to say, ion case of tort the actual damages to be awarded depend upon the discretion of the court and of course depending upon the facts and circumstances of each case. In an action for breach of contract, generally the plaintiff “sues for a pre-determined and inelastic sum of money.”

In a breach of contract, motive of the party breaking the contract is immaterial. In tort also generally motive is irrelevant but sometimes it may be taken into consideration and in such exceptional cases, the evil motive of the defendant, if proved, will tip the scales of liability against him.


READ MORE ABOUT LAW OF TORT....
Some Definitions of Tort