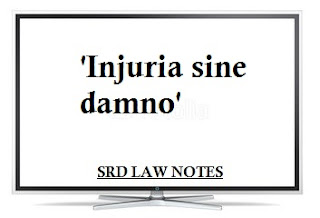 The meaning of this maxim is injury to legal right without any monetary loss.  This is actionable,  because there is violation of legal right, even though plaintiff suffer no loss in term of money and defendant is liable.

In simple words,  Injuria sine damno means Injury without damage or it means infringement of an absolute private right without any actual loss or damage.  whenever there is an invasion of legal right, the person in whom the right is vested is entitled to bring an action and may recover damages, although he has suffered no actual harm. In such case, the person need not prove the actual damage caused to him. Example Trespass to land or property.

Suppose 'A' enter a private compound without permission of the owner just for asking water, here the moment 'A' step in, A commit trespass and action can lie against 'A' even no actual damage is caused.

Here are some famous cases -

Fact-
Plaintiff was legal voter ,his name was there in voter list.defendant was a returning officer, i.e. incharge of election.  Deft. Refused the plaintiff to offer or to tender his lawful vote to his candidate. Plaintiff sued Deft.for compensation even though no loss is caused in term of money.

Whether defendant is liable.

The plaintiff suffered no loss in money. Moreover, the candidate to whom he was about to offer /tender his vote got elected.  So deft.not liable

Fact-
It is the similar case to Ashby v White.  The name of plaintiff was deleted, dropped from voter list by the Deft corporation, so plaintiff couldn't exercise his right to vote . Plaintiff sued Deft.corporation for compensation.