Home » Law of Tort » Some Important Definitions of "Tort" 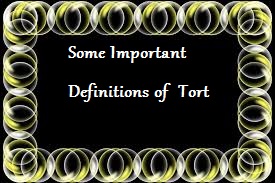 Here are some of the important definitions of "Tort" lets see -

1) Salmond-
"Tort is civil wrong, for which remedy is a common law action for unliquidated damages, and which is not exclusivel breach of contract or breach of trust, or other merely equitable obligations".

2) Ratanlal and Dhirajlal-
"Tort is civil wrong, independent of breach of contact for which the appropriate remedy is an action for unliquidated damages".

3) Winfield and Jolowics-
" Tortous liability arise from the breach of a duty primarily fixed by law; this duty is towards persons generally and its breach is redressible by an action for unliquidated damages "

4) Salmond & Heuston -
"A tort is a civil wrong for which the remedy is a common law action for unliquidated damages , and which is not exclusively the breach of a contract or breach of trust or other merely equitable obligation."

5) Sir Frederick Pollock -
Sums of the normal ideas of tort -
Every tort is an act or omission (not merely the breach of a duty arising out of a personal relation, or undertaken by contract)  which is related in one of the following way's to harm (including interference with an absolute right, whether there be measurable actual damage or not) suffered by determinate Person -
A) it maybe an act which, without lawful justification or excuse,  is intended by the agent to cause harm,and does cause the harm complained of.
B) it may be an act in itself contrary to law, or an commission of specific legal duty,which cause harm not intended by the person so acting or omitting.
C) It may be an act violating an absolute rights (especially rights of possession or property) , and treated as wrongful without regard to the actors intention or knowledge.  This,  as we have seen, is an artificial extension of the general conceptions which are common to English and Roman law.
D) it may be an act or omission causing harm which the person so acting or omitting to act did not intend to cause,  but might and should with due diligence have foreseen and prevented.
E) it may,  in special cases,  consist merely in not avoiding or preventing harm which the party was bound.  Absolutely or within limits to avoid or prevent.

READ MORE ABOUT LAW OF TORT....