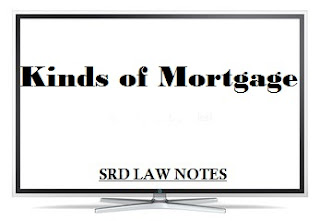 5) Mortgage by deposit of title-deeds

1) There must be a transfer of specific immovable property.

2) The position position of the property is retained by the mortgagor.

4) The title is not given to the mortgagee.

5) Mortgagor binds himself to pay mortgage money by Personal security.

6) Mortgagor has a right to sale on execution of decree against the mortgagor ,

7) Mortgagee has no right of  foreclosure.

Essentials of  mortgaged by conditional sale -

1) Mortgagor  ostensibly sells the immovable property by a sale. It is only ostensible and not real .

2) The Mortgagor has given title and possession to the mortgagee and hence mortgagee gets a right to usufruct  property.

3) on default of payment of mortgage-money the sales
Shall be absolute.

4) In case mortgagor repaid the loan , the sale shall become void .

5)  that mortgagor is entitled to get the property transferred on such payment.

6) No Personal security and right to sale is given to the mortgagee.

7) Mortgagee gets a right  to foreclose the property

1)  No title is given to the mortgagee.

2)  Mortgagor has given possession and hence mortgagee enjoy a right to usufruct.

3)  Mortgagor has not given any personal security a right to sale a foreclosure toy the mortgagee.

2) The mortgagor bind himself to repay the mortgage money on a certain day.

3) The mortgagee is not given the right to foreclosure.

Where a person in any of the following towns, namely, the towns of Calcutta, Madras, and Bombay, and in any other town which the State Government concerned may, by notification in the Official Gazette, specify in this behalf, delivers to a creditor or his agent documents of title to immovable property, with intent to create a security thereon, the transaction is called a mortgage by deposit of title-deeds.

3) An intention that the deed shall be security for the debt ; the documents of title to immovable property with intend to create a security thereon . This mortgage can only be made in any of the following towns namely Calcutta , Madras, Bombay , Lucknow, Allahabad & Kanpur and in any other town which the state Government concern may specify on this behalf .

A mortgage which is not a simple mortgage, a mortgage by conditional sale, a usufructuary mortgage, an English mortgage or a mortgage by deposit of title-deeds within the meaning of this section is called an anomalous mortgage.

It does not fit in above five mortgages , which is a combination of two or more of above mentioned type mortgage.
Author SRDLawNotes