42nd Amendment and The Preamble 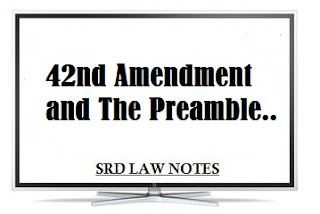 The  42nd Constitutional amendment has inserted three new words in the Preamble...

Secularism means a state which does not recognise any religion as a state religion. It treats all religion equally. The concept of secularism was already implicit in the constitution, "Liberty of........belief , faith and worship". Article 25 to 28 of the constitution guarantees to every person the freedom of conscience and the right to profess, practice and propagate religion.

The word 'socialism' has, however, no definite meaning. It has been invariably used in both the types of constitutions--democratic and communistic.

The word integrity is tended to put an end to separatist tendencies and make people feel that every part of India is their home. This concept was already implicit in the nature of the Federation envisaged by the  Indian Constitution. The framers have used the words "India shall be a union of states" in Article 1 of the Constitution with a view to make it clear that the states have no right to secede from the Federation.

Socialism is implicit in the Preamble and the directive principles of the constitution. The term "economic justice" in the Preamble denotes nothing but India's resolve to bring socio-economic Revolution. The Directive Principles, particularly Article 39 (B)and (C) of the constitution are  charters of social and economic liberties of the people.
The word 'socialism' has, however, no definite meaning. It has been invariably used in both the types of constitutions--- democratic and communistic. Generally the term implies a system of government in which the means of production is wholly on partly controlled by the state, India's socialism is, however a democratic socialism and not a 'communistic socialism' . For this purpose  the Preamble has combined both the words. Socialism and democracy in the Preamble. This combination of the words ; socialism and democracy have been criticized by many writers. It has been said that democracy and socialism cannot co-exist.

This criticism however not justified in view of the gradual change of thinking of the modern socialists. Their thinking is in line with the idea of a welfare state which would prevent only the excess of exploitation and free competition without destroying individual initiative and without detriment to the political freedoms. It is thus, marriage of democracy and socialism which has been embedded in the Indian Constitution.