Kinds of Interest in the Transfer of Property. 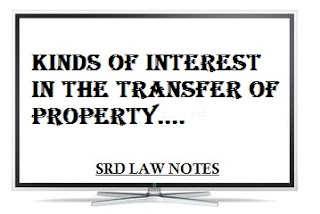 Kinds of Interest in the Transfer of Property.

The definition of vested interest is defined u/s.19 of Transfer of Property Act which provides -
"Where, on a transfer of property, an interest therein is created in favour of a person without specifying the time when it is to take effect, or in terms specifying that it is to take effect forthwith or on the happening of an event which must happen, such interest is vested, unless a contrary intention appears from the terms of the transfer."
A vested interest is not defeated by the death of the transferee before he obtains possession.

An intention that an interest shall not be vested is not to be inferred merely from a provision whereby the enjoyment thereof is postponed, or whereby a prior interest in the same property is given or reserved to some other person, or whereby income arising from the property is directed to be accumulated until the time of enjoyment arrives, or from a provision that if a particular event shall happen the interest shall pass to another person

S.20 When unborn person acquires vested interest on transfer for his benefit

Where, on a transfer of property, an interest therein is created for the benefit of a person not then living, he acquires upon his birth, unless a contrary intention appears from the terms of the transfer, a vested interest, although he may not be entitled to the enjoyment thereof immediately on his birth.

Where, under a transfer of property, a person becomes entitled to an interest therein upon attaining a particular age, and the transferor also gives to him absolutely the income to arise from such interest before he reaches that age, or directs the income or so much thereof as may be necessary to be applied for his benefit, such interest is not contingent.
Author Unknown